Who is Finn? The first Stormtrooper to remove his helmet is Finn, and that Star Wars: The Force Awakens trailer blew everyone away. During our Exclusive John Boyega Star Wars Interview, the man who plays Finn walked into the room full of charisma and humor. Sporting a “backpack for no reason by the way – just felt like it you know, and there is nothing significant in it,” Boyega set the tone for one of the most hilarious Star Wars: The Force Awakens Interviews yet.

(Thanks to Disney/LucasFilm/ABC/Marvel for an all expense paid trip to have this experience.)

When John Boyega was asked to describe Finn in three words, he said “Conflicted, Charismatic, and Temporary Bravery.” Finn leaves the First Order and sets out to figure himself out, and what he wants to be. I can relate to that, as I’m sure many others can. Even though we can relate, it can be hard to get into that character mindset to play the role, especially when things are under lock and key. 😉

It was hard to channel Finn. For 7 months I was auditioning for the part, and one of the reasons why I feel it was so long is because it’s really hard to channel a character without enough content. We weren’t allowed a script. We couldn’t take a script home, so I’m having to work with J.J. as if we are playing one of those mime games, and you have to guess what he’s saying. J.J. is having to explain without giving away the whole story. It has been a lot of me trying to find the extreme versions of myself, along with a great script, and making a fictional character. – John Boyega

Being that Finn is the first Stormtrooper to remove his helmet, we had to go backwards and find out from John Boyega what it was like to actually put on that Stormtrooper helmet and costume for the first time. Boyega joked, saying “I didn’t like the way my glutes looked” but then he got serious. How can you not be serious when it comes to a Stormtrooper suit?

It was a good experience. Something like that makes it so real that you are involved in this universe. When you put on this costumes, it’s the final step to becoming this character. You put on the costume and you see yourself as a character that isn’t you. That was something that was quite profound. – John Boyega

Even better than sporting a Stormtrooper costume, is having a lightsaber in your hand. AmIRight? I see the excitement in my kids eyes when they pick up their toy lightsaber and battle it out in the front yard. Holding a real one? I can’t even fathom the feeling.

That was a good day. It was in the trailers, in the ruins in the castle, and there are these kids who actually make the technology for the lightsaber, who are quite young. They brought it in this blackened case, opened the case and I picked up the ightsaber. I was like “just with a lightsaber, ignore me.” People just look at me and stared, and you can see how holding the lightsaber captures the imagination of onlookers. I was definitely egotistical that day. – John Boyega

Specifically me and Adam Driver had to do the choreographed scenes together. Finn has a lot of shooting and running, especially with me and Rey. Me and Daisy had to get our cardiovascular skills up and that was treacherous but it was fun. Now filming the scenes, you realize why the training was so intense because the scenes are literally practical affects your on the real location so there’s no time to kinda slack. – John Boyega

If you are wondering what kind of lightsaber John Boyega would have in real life, here’s your answer. 🙂

My lightsaber would be rainbow colored so they’d know I was there. I’d be like “Whooooo, it’s about to go down.” I’d be all over the galaxy – switching interchangeable. Confuse them a little bit with a flash mode and disco mode. I’m about peace, I’m not trying to get into fights with no one. – John Boyega

You may think with the excitement Boyega had holding a lightsaber, that he played with lightsabers as a kid. but nope. Boyega said he was “more of a Han dude. I wasn’t really into Luke like that. Not because he wasn’t a good character, just  because I like the characters that represent human beings in these kind of projects, in Sci-Fi.” Are you more of a Luke or a Han type of person. If you really think about it, we actually choose the Dark Side or the Light Side on a daily basis…..

So, John Boyega is certified in lightsaber training (even if he is a Han) and made it through 7 months of auditions for the role of Finn, but when it come to explosions, there is no training. You know that scene in the trailer, where Rey and Finn are running for their lives from an explosion behind them? Yeah, about that……

That was me. That was all me. That was alllllll me. I was fantastic. With explosions like that there are health and safety regulations, but while we were on set I don’t think I expected them to be that big.  I remember J.J. coming and saying “Okay John, we are going to do this scene and just run. Do the dialogue, and yeah, have fun. Cameras. Action.” I’m running and I look at Daisy, and I see that everyone is backing up. J.J. is going further and further away. They put a plastic cloak over the camera. People are putting goggles on, and hats. They called action and I realized why. If you watch the scene, I’m legit freaking out. I’m like “nah, hell no. I’m too young to die like this.” But it was definitely fun. – John Boyega

Seeing John Boyega’s love for Star Wars: The Force Awakens and his passion behind the role of Finn, it was hard not to wonder what was so inspiring about Finn.

What’s so inspiring about Finn is how complex he is. He’s a Stormtropper who has never really experienced individuality. We’ve always known Stormtroopers to just be one unit. We’ve never ever had a Stormtrooper take off  his helmet for us to see who he really is. All we’ve ever had is the lead characters in disguise. For me, already I find that iconic to me as a fan, to be able to actually talk to one of those. I always felt sorry for those Stormtroopers. It’s like they send them out just to be shot and I always wanted to say “man, ya know what, there must be a different career for you mate.” I feel like Finn is the first Stormtrooper to go “you know what? I need a new job.” It’s really cool to experience a Stormtroooper in that sense. – John Boyeha

Now that we know a little more about Finn, we were able to delve into the Finn and Poe (Oscar Issac) relationship, to which Boyega said “they definitely have a brother relationship and Finn finds a friend in Poe.”  He went on to say that “Poe represents what Finn wants to be. Poe is definite in his position in who fights for and what side he’s on. Finn is more in limbo.” I have a feeling this is going to be a relationship to keep our eyes and ears peeled to during the film.

Another person John Boyega spent a lot of time with is Harrison Ford. I honestly wasn’t paying much attention to the two of them together  yet, but after Boyega said “It’s going to be so hilarious when you see the duo, and lack of respect for each. But the undertone love that they have is pretty cool.”  now I can’t wait!! I mean, Boyega noted that “me and Harrison are obviously best friends. He will tell you that -we go way back it’s ridiculous.” so you can imagine how much fun they had to have filming. 😉

We formed a really interesting relationship that really has influenced the Finn and Han relationship. The first thing I said to Harrison when I met him, I walked up to him and he said “Hey, I’m Harrison Ford” and I said  “you look good man” and he said “what did you expect?” From then on, that influenced the way in which Finn sees Han. Finn is like “Yeah man, Gramps is cool” and Han is like “I’m Han Solo, have respect.” and there’s no respect what so ever. But, I think Han sees a young Han in Finn, so they form this bond. – John Boyega

For now, John Boyega can “take an Uber to the movie theater to see Creed, watch Creed, go on the streets shouting about it with my boys on Hollywood Blvd, then go to a car show, and no one recognizes me” but that’s all going to change come December 18th when Star Wars: The Force Awakens hits theaters. Boyega is now part of the Star Wars world and that fact alone, can change a persons life forever.

It feels really cool and quite weird at the same time. You don’t think about all of those specifics when you are auditioning because it’s all about booking the part. Also, you don’t think about that while filming because it’s about the reality of the scenes, and characters don’t know they are in a Star Wars movie that will change peoples lives. I remember being with my driver in the UK when we were going to the set and he said “ya know what mate, when you die, you’re not gonna be really dead because you’re gonna be everywhere anyways.” It’s an interesting thought and it’s quite surprising to be a part of that. – John Boyega 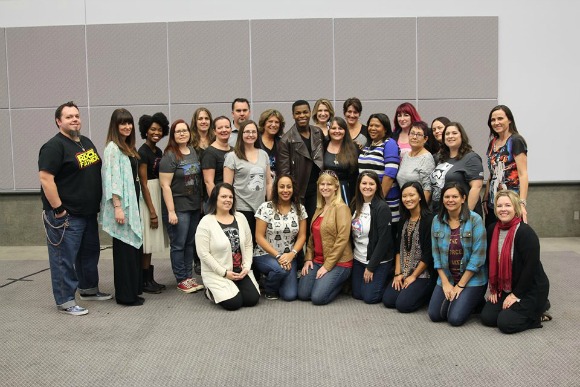 To wrap up this Exclusive John Boyega Star Wars Interview, I will leave you with why Boyega feels Star Wars is timeless. It’s pretty insightful…..

In my opinion, it’s the continuous dialogue between fans. Fans have the ability to make a whole press conference, on probably two minutes worth of footage. That keeps fans engaged even when the movie is over. There’s only been 6 films, but if you look at the fandom it reflects as if there’s been 20. I think it’s because there are different ways in which you can experience Star Wars. You don’t necessarily have to watch the films, you can just have the merchandise and know it from there. There are several ways you can be a Star Wars fan and I think that’s different to any other property. – John Boyega

Now that I’ve answered the question, Who Is Finn, you can Catch Star Wars: The Force Awakens in theaters on December 18th!