As the mother of teenage and toddler girls, I’m going to say that it’s about dang time we had another awesome female on screen to wear role model shoes. “She’s a kick-ass woman” as Daisy Ridley put it, and “the new generation’s Luke Skywalker” as president of LucasFilm Kathy Kennedy stated. Who is she? She is Rey in Star Wars: The Force Awakens! I got the inside scoop from the woman who plays her in this Exclusive Daisy Ridley Star Wars Interview!

Hearing Kathy Kennedy call Daisy Ridley the “the new generation’s Luke Skywalker” during our interview, not only raised my excitement level for our Exclusive Daisy Ridley Interview, it also increased my eagerness to see Star Wars: The Force Awakens in theaters on December 18th. I didn’t think that was possible, but when you hear about the girl power in the newest Star Wars film, you can’t help but get excited. How did Daisy feel about Kennedy relating her to Luke Skywalker?

It’s weird because I wasn’t really thinking about myself in those terms when I was doing it, because I think that might have been slightly overwhelming.  Now I can kind of see all of them in her. She’s a pilot so there’s Han, she’s a kick-ass women so there’s Leia, and definitely the humble beginnings and incredible story is the same as Luke.” – Daisy Ridley

It’s no secret that Star Wars is an impressive franchise. Branching from films, to books, to toys, and beyond, it can be overwhelming to think of it all. The best part is, you don’t have to know it all. You don’t even have to know a single thing to enjoy Star Wars: The Force Awakens. Even Daisy Ridley pointed out during our interview that you don’t have to be a Star Wars Super Fan to enjoy the movie.

“I think, not everyone is a super fan, and to be representative of those other people is great. I wasn’t a huge star wars fan before so I’m hoping the fact that I’m as excited as I am, I  hope that other people can feel that, and perhaps feel like this is something they can now come on board to, if they haven’t already felt that.” – Daisy Ridley

Speaking of those other people, many of them are young girls like my daughters, and women who may be experiencing Star Wars for the first time on December 18th. There is a relate-ability to the story of Star Wars: The Force Awakens because “Rey is not polished. She’s nuanced.” as Ridley said.  That is something many women can relate to and that is needed because “they can’t follow a story sometimes, if there’s nothing representing them in a film” and I think Daisy is right when she said that.

I think I’ve been very lucky in my life to be able to look up to incredible women. Me and my mom have an amazing relationship, she is really an amazing woman, and my gran, and my mom has a group of friends who we grew up with. I remember when I was auditioning and met Kathy Kennedy (and I didn’t really understand who she was at that point, which is embarrassing now) and she asked me who I looked up to, and I talked about them. Now I look at Kathy and think she is another person, she’s another woman I look up to. The women I look up to are older, their wiser, they have far way more life experience. – Daisy Ridley

When it came to auditioning for the role of Rey in Star Wars: The Force Awakens, Daisy Ridley said it was “very long, and I’ve never been as nervous for an audition as I was for it.” She was so nervous she showed up an hour early, opted to head to “a nearby coffee shop to sit and chill” and then went back to the audition a half hour early only to be told “no you need to come back because you’re still to early.‘ I’m a punctual person and I’ll be honest, I probably would’ve camped outside the night before if a Star Wars role was on the line. 😉

I had a really weird sense, it sounds cliche, not destiny, but a sense of something was going to come from it. So I already had that in my mind that was pushing me forward, but because of that I was obviously putting a great deal of pressure on myself. So, I didn’t really enjoy the audition process and felt like I was kinda screwing up.  luckily J.J. obviously saw something. Then, at my last audition, I really felt like I did a good job and I was really pleased. Obviously I still wanted the role, but even if I didn’t I was really glad I’d shown him what I can do. Luckily I got the role so that was a good ending.” – Daisy Ridley

One of my teen daughter’s favorite movies is Matlida. When Daisy Ridley mentioned that Matilda was her favorite film during our interview, I giggled inside. She didn’t realize it while filming Star Wars: The Force Awakens, but she may have channeled a bit of her inner Matilda.

Obviously the stories are different, but there’s being in a place that isn’t fulfilling and isn’t emotionally giving you what  and you need, and not being appreciated. Matilda is obviously in a family that doesn’t do that to her, and Rey has no one. But to go on a journey of self discovery, and push yourself beyond limits and meet people who bring the best out of you, I can definitely see those parallels. – Daisy Ridley

Now you see how Rey and Matilda are similar, but what about Rey and Daisy Ridley? The answer here, was another answer that had me thinking holy cow do I really have to wait to see Star Wars: The Force Awakens? I’m telling ya, if Daisy Ridley doesn’t win some sort of award for playing Rey, I will seriously be shocked.

All of the qualities I posses in small things, I think Rey has in greater amounts. I like to think I’m kind of brave, but she’s far braver. I like to think I try and do the right thing, but she far exceeds that. She’s not polished. She’s nuanced and I think that’s why she’s so brilliant and so relateable. But she’s far more of anything I think I could ever be. I guess  pheraps because of her circumstance, or the fact that she’s not real. But Rey is honest and open. I hate lying, I’m a very open person. She’s open to everything that’s going on around her even though it scares her, even though it makes her feel like she wants to run, she kind of plows on. I hope I have those qualities. – Daisy Ridley

Do me a favor and take a moment, right now, and tell yourself that you like you. You deserve that moment and to hear those words, because you are worth it.

Daisy Ridley celebrates and enjoys herself, but it does take her a little time to swallow the fact that she’s on the big screen. Thanks to Harrison Ford, she knows it’s okay to not enjoy watching yourself. She said it  “was very odd, really odd” and I would probably feel the same way. We’ve only seen the trailers and when Daisy saw them  she “felt an overmwhelming sense of ‘oh my god look what I’m a part of'” because of all of the work that has gone into the film, and the “thousands of people and time and energy and love has gone into this thing” and can you believe we are just days away from the release?! Daisy Ridley is one of the lucky few to have watched Star Wars: The Force Awakens already. Her response?

I got in the car and just wept the whole way to the airport. But I didn’t quite no why.  I can’t imagine being a mother, people say the emotions get more, and I’m going to be so emotional. It hits you and the tears come and you don’t know why your doing it, and it kinda settles again and then you remember. And the 10 hour plane journey home I’d sleep and I”d wake up and I’d be panicky. It was really weird. It was so much more than watching the trailer, but the overwhelming sense is the same. I’m still so incredibly pleased to be part of it. I can’t believe I’m a part of it, and that this is a thing and people are going to enjoy this that much. I still grapple with the fact that it’s happening. – Daisy Ridley

Stay tuned for my Exclusive Interview with Jon Boyega (Finn) coming up on Tuesday!

I’m just an actress, I’m not changing the world, but to be part of something that is perhaps groundbreaking,  and to be part of a movement of women, not just in film, all over the world in different sectors – that is an incredible thing. – Daisy Ridley 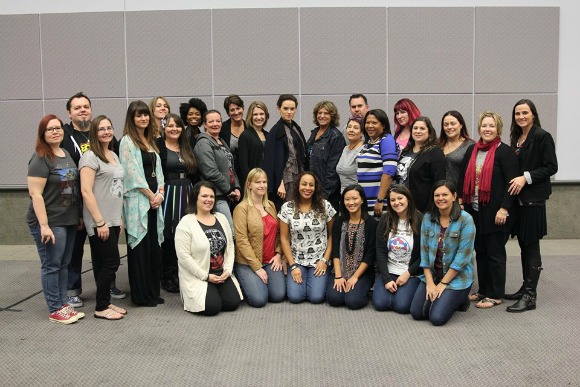