You are here: Home / Entertainment / Exclusive Harrison Ford Interview: What It’s Like to Return to the Role of Han Solo

Last weekend I had the privilege of sitting down for an Exclusive Harrison Ford Interview about Star Wars: The Force Awakens. I’ve been a fan of Ford’s since childhood, and not just because of Han Solo. So many great movies starring Harrison Ford that I watched with my parents, and then my husband, and now our kids. Harrison Ford is a legacy of his own, being passed on from generation to generation and I GOT THE CHANCE TO INTERVIEW HIM. Okay, now that I got that out of my system, lets talk about what it’s like to return to the role of Han Solo!

Exclusive Harrison Ford Interview: What It’s Like to Return to the Role of Han Solo

Over 30 years ago, in a galaxy far far away, Harrison Ford took on the role of Han Solo. A role he didn’t realize would have the legacy it does because as Ford said, “you’d be locked up if you came to that conclusion.” But it happened and here we are, about to see Han Solo standing with Chewbacca and flying the Millennium Falcon again, something Harrison Ford said was “familiar. The same thing only different.”

You put on those clothes….you turn around and see that guy in the Chewbacca suit, and you know what the drill is. I’ve walked more than a mile in those shoes and it was a familiar path. I was happy to be back. – Harrison Ford

There was kind of fairy tale structure in the characters, and in the story. When you have beautiful princess, a callow youth, a wise old warrior, and then me, it was easy to figure out my place in that structure. –  Harrison Ford

I remember reading an article a where Mark Hamill thought Harrison Ford might turn down the opportunity to play Han Solo again. Thankfully that didn’t happen, but Ford did note that “if we were trying to do exactly the same thing, and trying to dye my hair and pretended that 30 years had not gone by…I would be much less comfortable.” Good news for fans, that is! 😉 Speaking of Mark, as to reuniting with the some of the cast, Harrison Ford said “it’s great to be back with Mark and Carrie, and spend a little time with them, and peter Mayhew and a lot of the crew. Some of the older members of the crew had worked on the earlier films.”

So, why is it that Harrison Ford returned to the role of Han Solo after all these years?  Not only did Ford think the “script was very good” and the “roadmap for Han Solo’s character was worth coming back to” but it was also because of “a director (J.J. Abrams) whose work I admired and knew from a previous film 25 years ago.” Harrison Ford also joked to the fact that Star Wars: The Force Awakens also “acknowledges the reality of the passage of time, deals with the question of what happened while I was off stage in my dressing room for 30 years, and it deals with it in a really smart way.”

I  still can’t believe that I was given the opportunity for an Exclusive Interview with Harrison Ford, one of the most talented actors on the planet, and beyond. He was kind, wise, had fun with our questions, and gave us a look at what it was like to play Han Solo then and now. I could really tell that when Harrison Ford said “I’ve been doing this for a long time. I love doing it”  that he meant it a million times over.

A great deal of this is a service occupation. Storytelling is a service occupation, much like being a waiter. You deliver the food. You don’t bang it on the table in front of them. You wait until the right moment, you slip it down. You keep your eyes scanning the diners. And you are there when you see them beginning to look for you. It’s the same. It’s a public service job, you know. So it’s not about me. I’m not the customer, but I love working here. – Harrison For 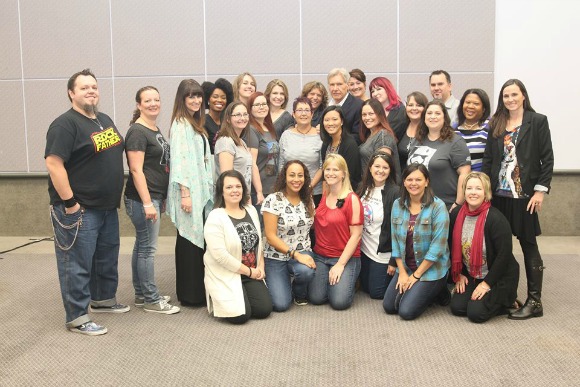 After our day full of Star Wars: The Force Awakens interviews, we headed to Disneyland. While there we experienced Path of the Jedi. While leaving the ride, there were several parents and children chattering excitedly around me. One father asked his son if he was excited to see the new Star Wars movie. The excitement coming from that kid as he shouted yes, and rattled on about all the awesomeness he saw….it warmed my heart. There are so many reasons why Star Wars is being passed on from generation to generation…..

“The breath of the imagination that’s involved in these films. The strength and worthiness of the mythology that underpins them. The questions that it generates in our minds about our own responsibilities, our own behaviors. All of that plus, whiz, and bang, and flash, and music, and good stuff.” – Harrison Ford

I don’t know about you, but I’m SO ready to see Star Wars: The Force Awakens in theaters on December 18th! Grab your family, your friends, and your Ewoks for an epic galaxy adventure! PS: There are no Ewoks in The Force Awakens so bring your furry plush from the 80’s if you have him.

“If it were not for the fact that these films have been passed on by parents to their children, at an appropriate juncture in their lives, and that generations have thus been introduced to me, I would probably have a much different career. I’m very grateful that these were family films that have been passed on as though there was some nugget of useful information in them, or entertainment in them, and recognizing their value to the audience gives them significance to me.” – Harrison Ford

Oh and if you are wondering if Harrison Ford has ever kept any props over the years that were his, well TrippinWithTara asked him and he said “I bought my horse and  Daniel Craig’s horse from Cowboys and Aliens. Still have mine.” How awesome is that?! 😀