One things I was really looking forward to during the #DoctorStrangeEvent was our Exclusive Tilda Swinton Interview. Her film background includes roles in Snowpiercer, Moonrise Kingdom, Adaption, Chronicles of Narnia, and now The Ancient One in Doctor Strange. She sat down with us in LA two weeks ago, for one of the most intriguing interviews I’ve been a part of.

Q: How would you describe The Ancient One, in one word?

It’s a noun and not an adjective. Perspective. – Tilda Swinton

If you are not familiar with the comic, The Ancient One in Doctor Strange was an Asian Man, “a very ancient Tibetan man living on top of a mountain” as Swinton said. Kevin Feige and Scott Derrickson wanted to shake things up, because “they felt that there were a couple of gnarly racial stereotypes” around The Ancient One who was “a kind of old, wise Fu Macnhu character” and Wong because “he was sort of a servant,” according to Tilda.

Scott wanted to make The Ancient One a woman, which I think was a really, really cool move, you know, to put a woman in the Marvel universe who’s not twenty-one and in a bikini was a good thing. Although we love the girls in bikinis, but it’s really important, I think, the idea of a sorceress supreme being a woman. Then, when he thought of an Asian woman, he was worried that it would turn into a kind of dragon lady thing. Basically they kind of came through the wash, and ended up with me. Thank you very much. It was such fun. – Tilda Swinton

When it came to getting the role of The Ancient One, Tilda Swinton was in a very fortunate position to not have to audition at all. While she was working in LA with the Coen Brothers, she got a call that Scott Derrickson wanted to meet with her. She’d met him in the past, but was clueless as to why he wanted to see her no. But she met in for tea anyways…

He told me he was going to do this film, and he told me that he had written this part for me. He basically kind of emotionally blackmailed me and said, ‘If you don’t do it, I’ll have to rewrite it’ so, I was flattered and honored and intrigued. Then of course I read it and I felt really good about it, but yeah, I was very lucky. – Tilda Swinton

Photo Credit: As Mom Sees It

Swinton knew from that moment, that Marvel’s Doctor Strange was going to be incredible. How can you not when Scott Derrickson tells you “this is going to be a film, a big, tent pole Marvel film about creation, and not about destruction.” After seeing the finished product recently, she said he’s done that, and it’s “the ‘magical mystery tour’. No one’s going to need acid after this…”

That’s what’s so moving about the film, is that this power that Doctor Strange is taught to wield, is a power for good. It’s new, and I know that all Marvel superheroes eventually work for good, but there’s a lot of city-flattening that goes on. But we actually put a city together again. When he described that to me, I remember thinking, ‘Oh wow I can’t wait to see this film, let alone be in it.’ I was in at that point. – Tilda Swinton

The Ancient One’s costume in Doctor Strange looks super comfortable! “Oh it’s such a great costume! It’s very, pajamas, and those beautiful colors… really, really wonderful,” as Tilda Swinton raved. Another part of the costume for The Ancient One had Tilda Swinton going bald. A suggestion that was hers, and that she loved.

It was my suggestion and we had several months of playing with options, all sorts of weird wig ideas, all sorts of long lobes and we went ‘round the houses with it. Eventually, it felt like less was more and I loved it. I thought it looked really, really ancient, but also kind of modern and rad. It was a nice feeling, as well. – Tilda Swinton

Tilda did a lot of her stunts in Doctor Strange, and she also had a stunt double for the really dangerous things. The only real struggle she had while filming was casting spells. “Learning all these amazing things with fingers, and then remembering what to say at the same time,” said Swinton. While learning spell casting was a struggle, the fight scenes were a lot of fun, and provided her a challenge.

The fighting is fantastic fun, really good fun, and difficult and interesting in fun ways. But yeah, tough. Lots of looping about, and I set myself the task that the Ancient One would be completely serene through all the fighting. That was something, because one thing that I find very challenging, and I would challenging anybody to do this, to do these moves without going [makes sound effects] like a nine-year-old boy, you know, because we all do. We’ve all done that when we were little. – Tilda Swinton

I have done cast interviews for several Marvel films now, and every person that is joining the Marvel Universe for the first time, has been over the moon about it. They’ve all equated it to various things in life, and for Tilda Swinton, it was like joining the circus. 😀 “We all joined the circus and we were all given these incredible costumes and everybody in the Marvel universe that I’ve met so far is so psyched to be a part of it.” said Swinton

Even though there are some people who have been there for years, you know technicians or people who have lit all these films for years, or Alex Byrne who does the costumes, she’d done like seven Marvel films, nobody’s jaded, everybody’s psyched. It’s a playground and the cast, we were all so happy to know each other. – Tilda Swinton

One of my favorite things about blu-ray releases are the bonus features. That’s probably why I love to hear about on set antics and adlibs during interviews. Some of the best one liners in movies have been adlibs, and having a director like Scott Derrickson, who is clear from the get go that even though the script was very good, the cast was free to be in the moment of the scene.

There’s a lot of nodding and winking that wasn’t scripted, and there are moments when we adlibbed it. Benedict has a moment when he’s saying, ‘What, like Madonna? Like Beyoncé?’ and we were all suggesting all the different names he would use at that point. I do remember, there’s one adlib I made that we laughed so much at that’s not in it, which is when I throw him out into the Himalayas, and then Everest, and then I come back and then he has to work his way back, and then he came back, and I wanted to say, ‘That’ll do, pig.’ That’s my one disappointment about the film, they said they thought that maybe the Ancient One wouldn’t have seen “Babe.” But, I think the Ancient One knows everything. – Tilda Swinton

Photo Credit: As Mom Sees It

During out Tilda Swinton Interview, she mentioned how she “loved all the action, and loved the feeling of being physical,” but that it gave her a reminder. A reminder of something important she should have learned earlier, that “a physical kind of energetic life, alongside some kind of introspection, is a really healthy thing.” A mixture of fight and zen scenes may have helped her out because she didn’t get sick while shooting Doctor Strange. She always gets sicks, so she “thinks that had something to do with it.”

There’s something very smooth about everything, and that has to do with the way it’s lit, and the way it’s designed. It’s cut like a comic strip. So it’s quite an experience. – Tilda Swinton 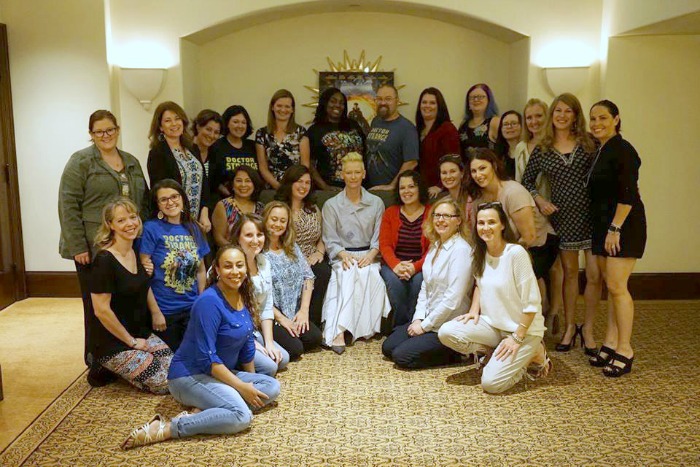 Previous Post: « How to Manage a Busy Teen Dance Schedule
Next Post: Exclusive Auli’i Cravalho Interview for Moana (with her MOM!) »