It was everything I had hoped for and more, really. I assumed I would be working with the crème de la crème and I was. It was just great to be in such great hands. From costumes to everything was just so well done, so beautifully thought through and well-crafted. They didn’t even make me pretend that much with green screen. I mean that’s how considerate they were. They had real things on fishing wires to actually try and scare me. They are very thoughtful people. – Rachel McAdams

Rachel McAdams gets to sport comfortable scrubs and orthopedic running shoes for most of the film. As a highly skilled trauma surgeon, Dr. Christine Palmer isn’t just Doctor Strange’s friend, there is also a hint of romance there. Knowing very little about the role, or the comic itself, McAdams was still excited to take on the role because of one man.

I was over the moon. I met with Scott  Derrickson and he was so incredibly passionate, and a self-proclaimed comic geek. I think that’s who you want at the helm of something like this. It was so personal for him. I just knew he was the right guy for it and that I’d be in great hands, and you know that Marvel would be so supportive as well. I was just excited at the possibilities. – Rachel McAdams

Chatting with Rachel McAdams around the conference room table that morning, it quickly felt like we were old college sorority sisters catching up. She talked about how she is a “total scaredy-cat in real life so it’s not a far stretch for me” when it comes to being startled on camera. Another thing she talked about were her conversations with a dummy.

There was a dummy, because there were times when Benedict had to be on wires, but there also needed to be his body on the table as well. But, the dummy was so lifelike that I would talk to it. I would squeeze his arm and be like, ‘are you okay? you haven’t said anything in a while. Are you hungry? Can I get you something?’  – Rachel McAdams

When you see Doctor Strange in theaters, you will know exactly which dummy scene McAdams is talking about. It’s the first time Palmer sees that Strange has powers. It’s an edge of your seat scene and one that may have you shedding a tear. Not as meany tears as Rachel McAdams and Benedict Cumberbatch shed in one day though.

Benedict Cumberbatch is such an extraordinary actor that you just have to be present with him and it all kind of falls into place. I mean, we did a lot of crying together. We cried one day for eight hours straight, every single take, and I’ve never been able to do that before. I mean, it comes, it goes, it comes back again. But with him, he’s so emotionally available and present that I’d look at him and I’d start crying. He’d look at me…it was just like water works all day long. We both had these incredible headaches at the end of the day and I was like, ‘well we’re dehydrated.‘ I really have to give kudos to him for that. – Rachel McAdams

Sometimes an actor or actress is so dang good at being emotional, that just the look on their face makes you feel the feels. Rachel McAdams has this ability. She is so intensely emotional in the film, that we had to find out if there is a special memory or place that she draws from, to bring out the emotion in her character.

Having a mother as a nurse, who’s so compassionate, and she unfortunately would take her work home with her sometimes. I think Christine’s more that kind of character. I kind of grew up with that a little bit, and have great admiration for people who do that for a living, and who are real empaths. So I suppose I drew on that from my mom a bit. She did IV therapy. If she would miss someone’s vein, she beat herself up so bad. So, yeah, I guess it was a little bit personal that way. – Rachel McAdams

It wasn’t just the emotional scenes that McAdams had to prepare for. Her role as a doctor required some research, that turned into a hobby she took with her everywhere.

I did get to shadow some amazing brain surgeons, a female brain surgeon in Toronto, another surgeon in London, and then we had a surgeon onset every day. He taught me to do sutures and was practicing on turkey breasts. Raw turkey breasts. That was interesting. Oranges, that was a little more easier to take in my purse so I could practice wherever I went. It was very educational and I became kind of obsessed with the suturing. It was almost like knitting. I just took it everywhere with me and would put it on a doorknob, and I think I looked little crazy, but it was fun. – Rachel McAdams

McAdams even had one of the doctors offer to take her up in the Evac helicopter for the weekend. She thought it was pretty cool, but is terrified of flying and has a weak stomach. That combination made her decline the generous ‘for the sake of everyone’ because she was ‘worried I was going to be fainting in the corner of the helicopter and causing problems‘. While she passed on that particular experience, she still learned a lot from her research.

I read this really great book called “Do No Harm” by Henry Marsh, who is a world-famous brain surgeon, which was a phenomenal book, and really eye-opening when it comes to being your own advocate, when it comes to your health. I thought it was so funny, he said ‘the number of people who don’t ask me how many times I’ve actually done the surgery I’m about to do on them is extraordinary‘. It gave me some good insight into things, questions to ask if I was ever in that position. Rachel McAdams

I told you how important Doctor Strange’s cloak is in my Benedict Cumberbatch Interview, and even Rachel McAdams said “No, you couldn’t touch that thing. Sacred cloak. No, I just got to look at it.”  So sacred that if McAdams continues to play a role in the Marvel Cinematic Universe, she wants her own cloak.

Oh, I want my own cloak. I mean, that’s also up in the air. I haven’t really thought about it because it really is sort of to be determined. I think the success of the film determines that. So, we’ll see. I mean, I loved being a part of it so of course I would be more than happy to go forward with it. But, who knows. – Rachel McAdams

Wrapping up our exclusive Rachel McAdams interview, we had to find what superpower she would like to have. I about squealed in my seat when I heard that our superpowers are the same. Seriously. You don’t know how many times I’ve driven down the street and thought the exact same thing! 😀

I would like to be invisible because I’d love to go into people’s houses and see their interior decorating. When you’re driving at night and you can kind of see through the window and you think, ‘oh that looks so cozy in there’. I wish I could get a free pass. That’s probably the one I’d pick. I’d be a total creeper but… – Rachel McAdams 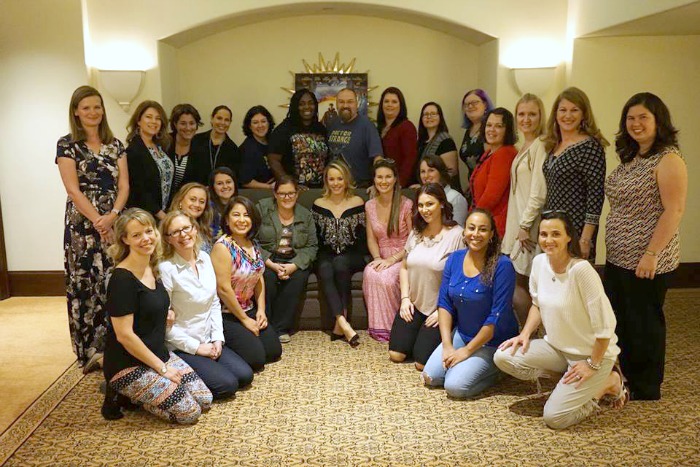 I hope the “Mean Girls” like it. I really hope everyone loves it.There couldn’t be a more perfect Doctor Strange in the universe that they could have chosen. I hope everyone will love what he’s done and take the ride. – Rachel McAdams