Pete’s Dragon hit theaters last Friday with two stars you may be unfamiliar with. Oakes Fegley (Pete) and Oona Laurence (Natalie) have big roles in the film, and they fill those shoes with magic and awe in every scene. While in LA for #PetesDragonEvent last week, part of the excitement included an Exclusive Oakes Fegley and Oona Laurence Interview for Pete’s Dragon, that I’m sharing with you today! (Big thanks to Disney for the all-expense paid press trip opportunity.)

It was a Disney film. I was, like… Wow! I’m incredibly proud of myself. I can’t believe I got the role, and it’s just been life changing. – Oakes Fegley

Neel Sethi as Mowgli in The Jungle Book, Auli’i Cravalho as the next princess in Moana film, and Oakes Fegley as Pete in Pete’s Dragon. Disney somehow manages to find these unknown, amazing kids that are beyond talented and it breaths life into the magic happening on screen. You could be that kid, in the forest, with his dragon.

We did the audition, and then I think I did another audition. And then I ended up doing a chemistry read with Oakes. I guess it was kind of just, like that! Then when I found out I got it, I was, like, oh my god! I’m going to New Zealand. Whoa, it’s… I was, like, crazy. – Oona Laurence

You could feel the energy from Fegley and Laurence in the room. The pure excitement they had for Pete’s Dragon and being apart of it all. That is what Disney is all about – making dreams come true and offering the priceless experience of working with a dragon.

Yeah, it was really, really cool. I think seeing the dragon, too….they gave us rough drafts of the dragon, but we had never seen it in full. I think when we both saw it, we were both, like, ‘oh my god, this is amazing! How did they put this together?‘ It looks so real. – Oakes Fegeley

I love the whole movie, but I the part where Oaks and Elliot say goodbye really made me, like, cry… I mean, that part was, like, oh god. It ripped my heart out. – Oona Laurence

I can’t wait to see the bonus features and behind the scenes footage of Pete’s Dragon. I’ve got mad love for these kids and working with green screen. I have a hard enough time visualizing my end-of-the-day glass of Moscato to keep me motivated, let alone pretending a tennis ball is my beloved friend.

I guess it was pretty tough at first, because a lot of the time the dragon was a pole with, like, a tennis ball on the end. So it was kind of difficult to imagine that it was a dragon. But I think, as time went on, I think we all  kinda got used to it. – Oona Luarence

Yeah, and like she said, it was like a tennis ball on a stick. Or a piece of tape on the wall. As, an eye line. So you had to imagine that it’s a dragon, and, like she said, it gets easier and easier as you get used to it. But at the beginning it was kind of challenging, and it was definitely hard. – Oakes Fegley

It’s not just green screen talent that Oakes Fegley and Oona Laurnce posses. They also enjoyed doing a lot of their own stunts for Pete’s Dragon! Nowadays I second guess myself before a cartwheel, but as a kid I would have loved to do stunts.

It was fun doing all of the stunts. We did stunt training before we started filming, and we felt safe with all the stuntmen, so all the stunts that we did, we just had a ton of fun and felt safe while doing it. So, it was really, really cool. – Oakes Fegley

Green screen experience and stunts on the resume means there is only thing left for Oakes Fegley to check off his childhood acting list. Extensions. 😉 You may notice the long locks and Pete in Pete’s Dragon, and we got the scoop on them!

It was actually extensions. They wanted me to grow it out as long as I could, but I couldn’t get it much longer than this. So they just ended up putting the extensions in. They were permanent extensions, so I couldn’t take them out at night. I had to get used to having really long hair, and I didn’t really like it. But, it’s fine because once I took them out, I was, like, my head is so light! – Oakes Fegley

Not everything came easy for Oakes Fegley and Oona Laurence while filming Pete’s Dragon. They talked about two challenging scense for them  and after seeing the film, I can see how they were challenging.

The most challenging scene is probably the scene where I have to leave Elliot, because I was crying about a green screen leaving me. I had to imagine that the tennis ball was going bye bye. So it was kind of hard, and after I had filmed the set a couple of times, I was just laughing. I couldn’t stop laughing. – Oakes Fegley

I guess the toughest was when my dad basically fell off the bridge. And, you know, I was never gonna see him again. I think that was pretty tough to imagine that. When really, I wasn’t actually looking off a cliff. I was looking at a green screen on the ground. So… – Oona Laurence

During our Bryce Dallas Howard Interview, she mentioned the beauty that is New Zealand. Oona Laurence echoed that and brought me one step closer to getting a passport so I can experience it myself. Have you ever been?!

It’s such a beautiful, and luscious place. I mean, oh my god. There’s so much to do there, too. It was great. When we had free time we would go do all the touristy stuff. And also, the people there are so nice, and at the end of it, my mom was, like, we have to move there. – Oona Laurence

Oona Laurence raved about New Zealand while Oakes Fegley raved about working with Robert Redford. Prettty sure my response would be the exact same if I added Mr. Redford to my co-workers list!

Robert was… I mean, he’s a legend. He’s really, really cool. He’s funny and he’s really nice. He’s a lot like a father to everybody, and he’s just amazing. He’s super. – Oakes Fegley

We couldn’t have an Exclusive Oakes Fegley and Oona Laurence Interview without finding out what Elliot’s dragon snot was made out of! You know you are curious too! 😉

It was water, and, all sorts of stuff. Do you know, those air guns where you pull it back, and then it’s kinda like a big circle? And then you pull the tab back, and then once you release it, it shoves air through it? It was the same sort of thing. It was just filled with that “snot” and then they blasted it at you. – Oakes Fegley

Now that they have their first Disney film under their belts, what Disney book to film would these two child stars like to star in next?

Maybe Rick Riordan’s Percy Jackson & the Olympus series. Haven’t made movies of them, but they’re all Disney Hyperion, so I guess that counts. – Oakes Fegely

Oakes Fegley and Oona Laurence left us with one last though before time was up on the interview. If there is one thing kids can take away from the Pete’s Dragon, they hope it is this….

For them to know that family is very, very important. And that you can’t give up on family because they are there for you whenever. Oakes Fegley

I would say the same thing. – Oona Laurence 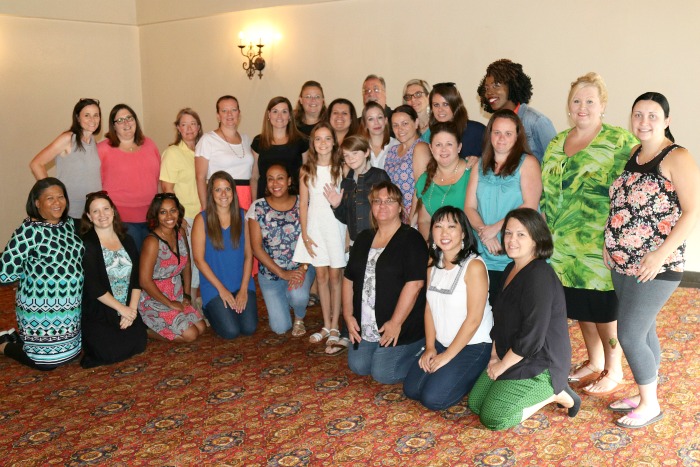 PS: If you are watching Oona Laurence in Pete’s Dragon and wondering where the heck you recognize her from, it’s Bad Moms! She played Mila Kunis’s daughter and after just seeing it the week before, I had to ask what it was like working on both films.

I mean, I like doing both. They’re both very different. And I think you get different things out of them. They’re really both different, but I enjoyed making both of them. And everybody on both of them were so nice, and I just want to keep on doing whatever comes my way. – Oona Laurence

Catch Pete’s Dragon in theaters now and stayed tuned for my Wes Bentley Interview on Wednesday!