You are here: Home / Uncategorized / Woman Up: Interviews with Go Go Tamago and Honey Lemon

*I was provided with this opportunity by Disney/Marvel/ABC. Any opinions are 100% my own.

One of the things I love about Big Hero 6 is the focus on “smart” heroes and not your typical “super” hero. Two of those “smart heroes” are girls, which I love even more. Go Go Tamago (voiced by Jamie Chung) and Honey Lemon (voiced by Genesis Rodriquez) send an empowering message to girls through Big Hero 6. Getting the chance to sit down and chat with these talented ladies was pretty exciting, especially having a teen daughter that loves Science, challenging theories, and pushing the limits.

As much, as I loved Go Go Tamago and Honey Lemon in Big Hero 6, we wondered what Jamie Chung  loved about playing her character, Go Go Tamagao.

Go Go Tamgao doesn’t say a lot at the beginning of the film, but when she does say something, it’s very on point and it’s quite sassy. She’s described to me as the Female version of Clint Eastwood in the group. It was fun to sass it up. If I said a line with too much of a smile, the Directors, Chris Williams and Don Hall would say: “No, No, No, No, No, a little bit meaner.” It really is the biggest blessing to have this cast, warm and loving characters cause you’ll never get to play that kind of part in a live action thing. I can speak for the both of us, we’ve been huge Disney fans all of our lives and we’ve been Princesses, and I literally would comb my red hair in restaurants as Ariel. It’s like a dream come true to be able to play these strong Female Characters and bring that down to future Generations. – Jamie Chung

Go Go Tamago and Honey Lemon are both strong female roles compared to the “Stereotypical” female roles we are normally used to. They have their own ideas and bring their own traits to the team. What is it like to play a strong female character in the animation world of Hollywood?

Talking further on stereotypes, what I love about this film is that there is no stereotype. It kind of breaks all of those boundaries in terms of you being a Nerd, and being not cool, This is the absolute opposite of that. In terms of strong female Characters, Honey Lemon and Go Go are so different from each other, yet they both represent strength in their own way. What Disney is great about is not giving a Cookie Cutter example of a strong woman. They come in different shapes and sizes, and different shades and that’s what I love about Big Hero 6. – Jamie Chung

While in LA, we got the chance to do a Voice Over for Baymax, and I will have more on that tomorrow, but it gave me a sense of what it is like to do an animation film. Knowing how the voice over process works, we wondered if Chung and Rodriquez  were very animated when doing their voice overs.

I heard this story of a famous Voice Over Actor that prefers to lay down and say all of his lines. I don’t know how that’s possible because I have to do the motion and I think Jamie is the same way. You have to do the motion and get that sound and it’s so hard to do because you have to stay still. It’s like, Nick is nowhere and you’re falling 6 feet and you’re landing on the floor. That noise, that’s when you’re falling. It’s really hard to do. You have to use your imagination but it helps you.  – Genesis Rodriquez

Genesis has imagination and creativity – check out the Big Hero 6 Inspired Nail Art she was sporting during the interview!

Landing the roles of Honey Lemon and Go Go Tamago had to be awesome for Disney Lovers like Chung and Rodriquez. I can only imagine getting the phone call that says “So, by the way, you got the role!”

I did the audition exactly like Honey Lemon and I hadn’t seen the Character at all. I took a very bold Fashion Choice. I did Socks in Heels and an Undershirt and then a Dress over it. I don’t do that look at all and I don’t know why I went like that. I saw Honey Lemon and the way she dressed and thought this is freaky. I couldn’t have landed it better. – Genesis Rodriquez

Disney had me come in and do the voice of the Character Milano. It was a big Table Read and all the big wigs were there, John Lassiter, everyone from Disney, the Creative Team of the Project. They had all the Artwork up and I had no idea what I was getting myself into. She needed to come alive off the page, so it was a huge responsibility. After that Table Read, he comes in and it’s not going any further. I felt like there was a lot of pressure on me. Luckily, I did a good job, then John Lassiter  and the Casting Director asked me to come in read for Go Go for Big Hero 6. That’s how I got my audition. It was cool. – Jamie Chung

We know how they got the roles and their personalities in voice overs, but how do Jamie Chung and Genesis Rodriquez prepare or an animated role?

There’s really not much you can prepare for. They improvise and you don’t have any idea what the story is about. It was a constant progression and change. Every day it’s like the new version, and you go through all your lines of a new version. It may sound pretty strange, it’s just your voice, but it’s so much more than that. I would stretch. I would physically warm up my voice. I would stretch like we’re going to run a Marathon.- Genesis Rodriquez

The most important thing is to be unique. Once you are in the room, you can really figure out where it’s supposed to be. When you are onto something, then you kind of go with that role. It’s like a speed bump. That’s the only thing that you can do and you have to be able to play. You really have to just tap into your inner kid and make that voice. – Jamie Chung

Go Go Tamago is quiet, athletic, sarcastic, and a daredevil. Honey Lemon has a quirky attitude, love of funky fashion, and is rather clever. How much of their own personalities did Chung and Rodriquez lend to their characters?

When you add a voice to it, personality to it, it really does come alive. If you look at each character and compare them to the person that’s playing them, they embody that character. Genesis to me is Honey Lemon. It’s her own personal attributes that give this character life. I think that’s what they did with Casting. They wanted the Characters to kind of represent the Actors that are playing them. In terms of Adrenaline Junkie and being sassy, I do feel like I embody those Characteristics. Like Genesis is just Honey Lemon, happy, perky, awesome, smart woman.  – Jamie Chung

Disney does such a good job at hiring honest honorable people who have to portray these Characters. They’re perfect at what they do, and they hire really special people. Everyone that was cast was just adorable and so much fun, and we immediately clicked. – Genesis Rodriquez

There are so many memorable scenes in Big Hero 6, scenes the invoke a lot of emotion. I cried at least three times and have been saying “Woman Up!” since seeing the movie. Knowing what triggered my tears, I had to know if Chung and Rodriquez had to reach for the tissues too.

Oh Man, the first time I didn’t cry because I was absorbing everything and very aware. Last night when I watched it with my nephew, my family, and everyone, I let myself go, and the moment where he goes, “You can’t leave me Baymax“…I was crying. I’m about to cry right now, it was so good. – Jamie Chung

I cried 3 times and I’m not gonna say the last two because I don’t want to spoil it to the Readers. The first time I cried (apart from the fact that I’ve seen the Disney logo, because that’s so surreal for me so I cried), are the scenes when he sees his reflection, like he’d be with his Brother. That kills me… – Genesis Rodriquez

I have to say I like FEAST. I hadn’t watched that yet…Oh My God. I love dogs and literally…. – Jamie Chung

I lost it. It’s so good.They’re really good at what they do, right? Disney really knows how to tug at your heart. It’s so Masterful and for kids and adults. – Genesis Rodriquez

What I love about Disney is they’re not afraid to tell the kind of untold story that’s like tragedy. It’s real life issues and Disney is not afraid to address them to the younger Generation. I think it’s what they do because in the end, everything is gonna be OK. It’s OK to be sad and it’s OK to be happy. It’s just like the process of overcoming grief and it’s really important. It’s always kind of a diffused message and it’s always there but, kids get it. – Jamie Chung

It’s a lesson about doing the right thing. – Genesis Rodriquez

I mentioned last week about 4 things kids will learn from Baymax. One of the great things about Big Hero 6 are the awesome messages that all kids can take away from the movie. Imagine being involved in creating such an inspiring movie and the changes it would make in you….

In terms of sending the right message, it is a Superhero Movie, but it stresses the importance of education and Science. I love that the message it sends is that intelligence and smarts are not sex biased, no more is it race biased. Everyone’s equal and everyone has that same opportunity to reach that milestone in terms of education. I think it’s cool to be part of that and also in terms of 10, 20, 30 years from now, this Movie still will be relevant. – Jamie Chung

I was so excited for a Movie to talk about Robots and Technology. I was into Robotics too and I’m an official Nerd. To even have a Movie that’s making girls want to be in Technology and be smart, I hope girls especially will be wanting that after this Movie. To be the first ones to raise their hands in class and realize that being smart is empowering. Robotics is cool. Science is cool.

Honestly, I think that is the perfect message to end this on….

Robotics is cool. Science is cool.

Catch Big Hero 6 in theaters NOW and stay tuned for my upcoming posts where I voiced Baymax, as well as an interview with the creator of Feast and more! 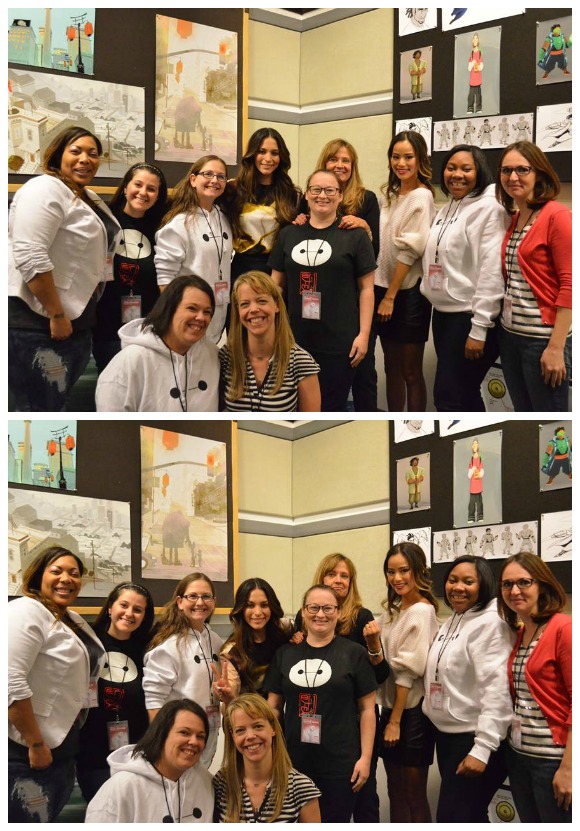 Previous Post: « Get Organized In Style with See Jane Work
Next Post: 5 Tips for Doing a Character Voice Over + Me as Baymax »