You are here: Home / Uncategorized / {Exclusive} On The Set of Disney Channel’s BUNK’D

I was provided with the experience of being On The Set of Disney Channel’s BUNK’D by Disney/Marvel/Disney XD. Any opinions are 100% my own.

How many of your kids (or you) watched Jessie on Disney Channel? I’m pretty sure we’ve seen all the episodes, especially now that Jessie’s on Netflix. Catching up on old episodes is great but, now you can enjoy your favorite Jessie characters on a new show! BUNK’D premieres on Disney Channel on Friday, July 31st after Disney’s Descendants, and stars Emma, Ravi, and Zuri Ross from Jessie!

That’s right, The Ross Kids traded in their New York Penthouse for the great outdoors! At least while they are away at summer camp in Maine’s rustic Camp Kikiwaka. And guess what? While in LA for the #AntManEvent, we stopped by Camp Kikiwaka to chat with some of the cast! I know….Maine’s rustic camp is in LA….who would have thought?!

“BUNK’D” follows siblings Emma, Ravi and Zuri Ross as they embark on their summer at Camp Kikiwaka, a rustic summer camp in Maine where their parents met as teenagers. Emma and Ravi step into new roles as CITs (Counselor In Training), learning how to be resourceful, responsible role models to their campers. Lou, the cheerful head counselor, and Xander, the camp heartthrob, befriend the Ross kids, who are complete fish out of water in the great outdoors, and step in to show them the ropes. Zuri makes new friends with her fellow campers, the anxious and overly studious Tiffany and compulsive fibber Jorge. Along with their new friends, Emma, Ravi and Zuri adapt to their new “home away from home” and settle into their exciting new lives at Camp Kikiwaka.

{Exclusive} On The Set of Disney Channel’s BUNK’D

Being on the set of Disney Channel’s BUNK’D made me want to go back to summer camp! The crew did a great job of making the set feel like camp. The decor, the mess hall, the outdoors, it all felt like being at summer camp. I’m officially jealous of those of you who work at summer camps and get to enjoy it every year as an adult!

The set of Disney Channel’s BUNK’D includes “commons” area where the campers can relax, enjoy a game or even read a book. Across from there is cafeteria with picnic style tables and lots of great camp decor, including some of the best salt and pepper shaker holders I’ve ever seen!

I fell in love with some of the Summer Camp Crafts that were hanging on the set of Disney Channel’s BUNK’D. I mean how fun are these?!

Just outside of the cafeteria is the “great outdoors”! Complete with a hammock, fire pit, cabins, and all the things you are used to seeing at summer camp. What it doesn’t have? BUGS!

After checking out the set of BUNK’D, we gathered at the picnic tables to chat with the cast. First up was Skai Jackson who plays Zuri Ross, Nathan Arenas as Jorge, and Nina Lu who plays Tiffany. These kids were a riot and it shows up on screen too! Skai of course loves being able to continue playing Zuri, I mean who wouldn’t with such a sassy fun character. Nina and Nathan, being the newer names on the show, mentioned how much they love seeing themselves on TV.

Chatting with Peyton List who plays Emma Ross and Miranda May who plays Lou, was like hanging out with best friends. These girls met each other on the set of Disney Channel’s BUNK’D and quickly hit it off and planned sleepovers! Being a twin mom, it was fun to learn that Peyton List has a twin brother that is also in acting, but more “serious” roles. I’m really hoping we get to hear Miranda May sing on the show, word is she’s got a voice!

We wrapped up our BUNK’D Cast Interviews with Karan Brar who plays Ravi Ross and Kevin Quinn who plays Xander. The most shocking thing of the day happened during this interview….I found out the Karan doesn’t really have Ravi’s accent – he was born in Washington! Impressive acting kid! Both of these boys have theater experience and you can tell that when they cameras turn on…their facial expressions and body language bring to life their lines.

When our time at Camp Kikiwaka had come to an end, we gathered for a group shot like any true campers would. 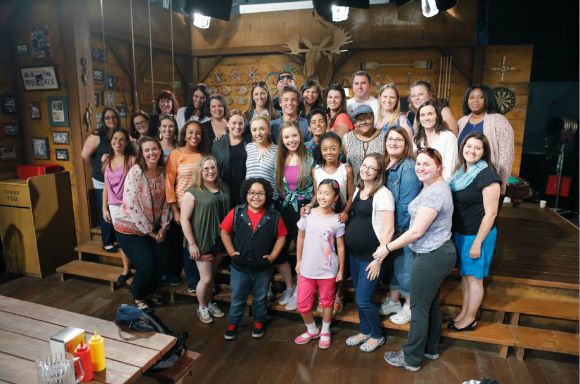 We watched them film an upcoming BUNK’D Scene and the cast is quite hilarious together. BUNK’D isn’t lacking in the humor we came to love on Jessie, that’s for sure! In the premiere episode of BUNK’D, the Ross kids arrive at camp and greeted by Gladys the camp’s owner who is “is even scarier than the legendary creature that’s rumored to stalk the grounds.” Another thing about Gladys? She has a  decades-old rivalry with the Emma, Zuri, and Ravi’s Mom and is out to get them. How’s that for a summer camp ghost story?

I can’t wait to snuggle up on the couch with the kiddos for the BUNK’D Premiere this Friday! Between a great cast of kids, a story line I’ve been missing since Salute Your Shorts, and a pretty sweet set, BUNK’D is a family-friendly show you don’t want to miss.

Watch BUNK’d on Disney Channel every Friday at 8 PM ET!

Previous Post: « Effortless Backyard Party Ideas + Easy BBQ Chicken Sandwiches
Next Post: 5 Reasons to Use Telehealth from the Comfort of your Home »