Thor: Ragnarok is now available on DVD, Blu-ray and digitally and I’ve got 15 Thor Ragnarok Fun Facts the involve pythons and kangaroos! We received an advanced copy and you can bet that my husband made it a family movie night the day it arrived. Many say it’s the best Thor movie yet, and my husband agrees. I’m partial to Dark World for obvious reasons but I still really enjoyed it. 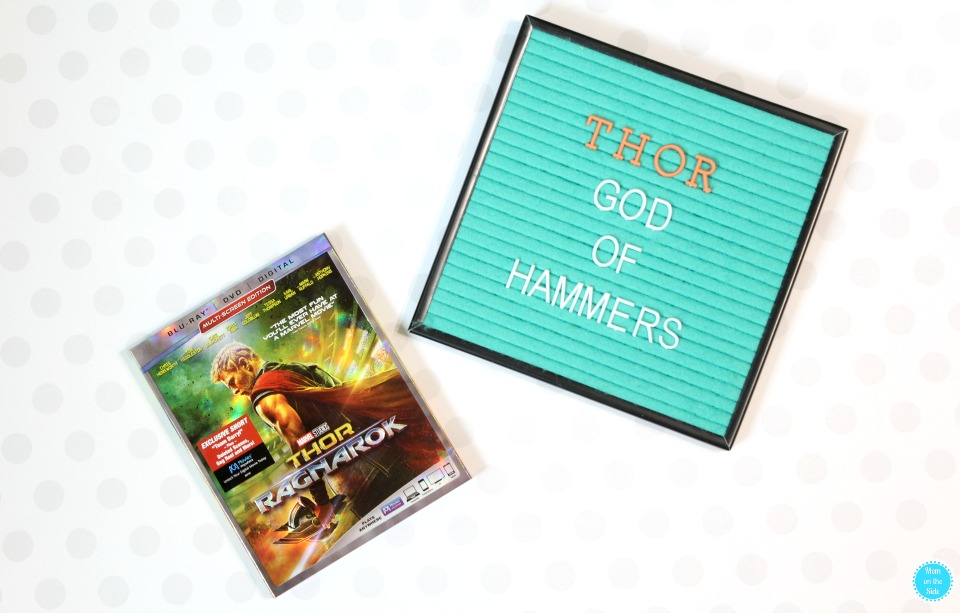 #1 Ragnarok translates to “the end of the universe” in Norse mythology.

#2 Director Taika Waititi not only directs, but also plays a new CGI character in the Marvel Cinematic Universe named Korg (introduced by Marvel in a 1962 comic book).

#4 Cate Blanchett’s, Hela, one of Thor’s most formidable enemies from the comics, is the first leading female villain in any of the Marvel Studios’ feature films to date.

#5 The film is the first feature in the Marvel Cinematic Universe to shoot not only in Australia, but in the entire Southern Hemisphere.

#6 Village Roadshow Studios has nine sound stages and “Thor Ragnarok” utilized all nine of them for both filming and construction. Stage 9, the largest sound stage in the Southern Hemisphere, was completed just weeks before Marvel Studios moved into Village Roadshow for pre-production on “Thor: Ragnarok.”

#7 The world of Sakaar (ruled by Grandmaster) in the story is like nothing ever before seen in any of the previous Marvel Studios’ films. Its design was inspired by the comic book illustrations of Jack Kirby, who co-created “Thor” (with Stan Lee) in 1962.

#8 Veteran costume designer Mayes Rubeo (“Avatar,” “Warcraft,” “The Great Wall”) made over 2,500 original costumes for the film (depicting both the worlds of Asgard and Sakaar), with all materials sourced in Australia.

#9 Throughout the four-day shoot in Brisbane, Australia, both Chris Hemsworth and Tom Hiddleston took every break in filming to greet the fans by shaking hands, throwing “swag” (posters, sunglasses, T-shirts and such from “Thor: The Dark World”) out to the crowd, signing autographs and grabbing personal cell phones for that once-in-a-lifetime selfie.

#10 Chris Hemsworth also had fun handing out pizzas to the Brisbane crowds, which were purchased by the production’s location manager, Duncan Jones.

#11 A local teenager spent all week on location hoping to meet Tom Hiddleston because she had sketched a portrait of Loki that she wanted to present to him. Production arranged for the two to meet in front of the local TV cameras.

#12 While shooting an exterior scene in the Australian wilderness, filming was briefly interrupted when a large python fell from the dense trees above. No cast or crew were harmed, and the snake was safely relocated by a professional snake handler, but not before a few brave crew members snapped some pictures.

#13 On days where Cate Blanchett was shooting, before cameras rolled on the first shot, Cate made a habit of leading the crew through a few minutes of calisthenics to start the day off right.

#14 During the early morning hours, before crew arrived for work, wild kangaroos were often spotted hanging around the backlot near the exterior sets of Asgard and Sakaar. How cool would that be?!

#15 On the first day of principal photography, a local Maori tribe performed a ceremonial dance to bless the crew in hopes for a smooth shoot. Eighty-four days of successful shooting later, the tribe returned and delivered a beautiful closing ceremony as a culmination to an incredible experience of filming on native land in Australia.