Disney’s Descendants premieres tonight at 8 PM ET and I’m guessing some of you have already been watching Descendants on the Watch Disney Now App! If you caught my Exclusive Interview with Kenny Ortega last week, you are familiar with the story that takes you beyond the “happy ending“. You may not realize though, there are 5 Things Tweens Can Learn from Disney’s Descendants!

Disney’s Descendants, set in the idyllic kingdom of Auradon, playfully presents the unexpected possibilities of what happens after the “happily ever after.” As it unfolds, Ben, the benevolent teenage son of the King and Queen (Beast and Belle from “Beauty and the Beast”), is poised to take the throne. His first proclamation is to offer a chance at redemption to Mal, Evie, Carlos and Jay, the trouble-making offspring of Maleficent, the Evil Queen, Cruella de Vil and Jafar, who have all been sequestered on the forbidden Isle of the Lost for 20 years. These villainous descendants are allowed into Auradon for the first time to attend prep school alongside the teenage progeny of Fairy Godmother, Cinderella, Sleeping Beauty and Mulan. Only time will tell if these evil teens follow in the footsteps of their wicked parents.

1) Finding the Beauty Within

Jane, the Fairy Godmother’s Daughter, struggles with the fact that her mother has a magic wand but won’t use it on her. She feels less than compared to other girls at Auradon Prep, and wishes Fairy Godmother would Bibbidi Bobbidi Boo her into a beautiful teenager. As Mal goes around magically given out new hairdos, she gives one to Jane in hopes of getting closer to Jane…and the wand. I won’t give it all away but the talk between Mal and Jane, and Jane and Fairy Godmother, about internal beauty, is one that all tweens should hear.

From the beginning of Disney’s Descendants the message of Freedom of Choice is clear. Ben, the son of Beast and Belle declares that his first order as King is to let four children off Isle of the Lost, the children of villains that had been banished to the island for 20 years. We see the Evie choose to follow her passion for fashion, Jay decides to join the Auradon Prep tourney team, Carlos finds out dogs aren’t so bad, and Mal….well, I will leave some things secret.

PS: Sofia Carson who plays Evil Queen’s blue-haired daughter, Evie, will also star in Disney Channel’s original movie, Adventures in Babysitting, an adaptation of the 1987 Elisabeth Shue comedy  that premiered next year. Can I just say that is how I first learned about Thor!)

There are a couple of “make it right” moments in Disney’s Descendants that highlight personal responsibility. From cheating on tests, to the usage of magic spells, and owning up to ones wrong doings. I love that those questionable actions are followed up with taking responsibility and making things right.

Asking for help isn’t always an easy thing to do. Having a group of great friend that know when to offer their help is wonderful. Mal, Evie, Jay, and Carlos begin to realize how great they are together, when they work as a team. They learn their own strengths and how each one fits together for both good and evil.

Fairness. Morals. Honesty. All of those things come up in Disney’s Descendants. Is it fair that the children of villains be treated as villains themselves? When you know you have done wrong, how do you make it right? And it’s not just about being honest with others, it’s about being honest with yourself too. I’m telling ya, I didn’t think Mal could make this 30-something year old mama dig deep inside herself….but she did.

Disney’s Descendants isn’t just a great film with make ya dance music and a peak your interest story line. Disney’s Descendants sneaks in those much needed topics for tweens in a relateable way. Okay, so we all don’t have a Chad Charming but we have friends that needs us, parents that we disagree with, and spells we wish we cold cast. Right? Oh, and there is a dragon. Boom!

In case you are wondering who some of those familiar faces are, and even those new one, here is the cast of Disney’s Descendants:

Leading into its television premiere TONIGHT, FRIDAY, JULY 31 (8:00 p.m., ET/PT), Disney’s “Descendants” has posted more than 1 million views on the WATCH Disney Channel app in just five days, setting records for engagement and viewing for the app which allows consumers to watch programming anytime and anywhere via their desktop, smartphone, tablet and connected TV devices. 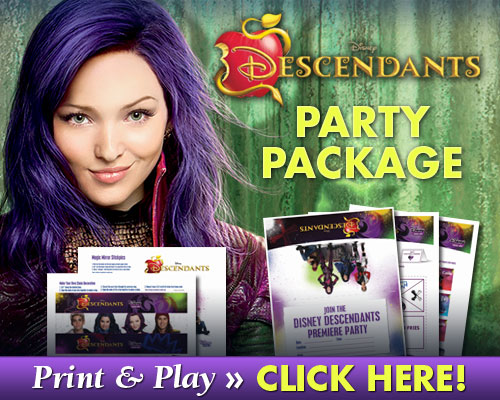 Previous Post: « {Exclusive} On The Set of Disney Channel’s BUNK’D
Next Post: 5 Reasons to Use Telehealth from the Comfort of your Home »